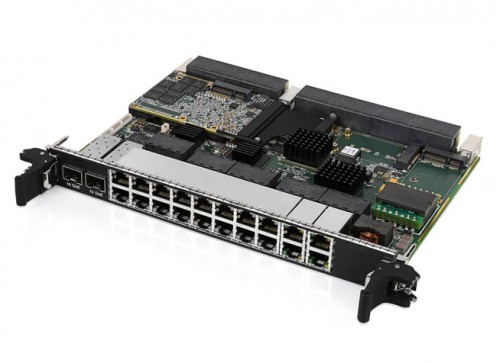 - Developed in alignment with the SOSA™ Technical Standard

SYSTEM OVERVIEW
The COM Module is a 6U single slot OpenVPX module. It is connected to the backplane via a x4 PCIe lane via VPX-P1. The COM module provides twenty Gigabit ports via a managed switch (16 with Power Over Ethernet+, POE+), and two SAM™ I/O sites for additional functions such as Wi-Fi, Cellular, Bluetooth and GPS.

The managed Ethernet switch supports Layer 2 and Layer 3 functions such as VLAN and QoS processing, enabling the delivery of differentiated services, security via intelligent frame processing, and egress frame manipulation. The switch may be configured via the host CPU USB/ COM port that is connected internally or via one of the front panel RJ-45 ports. Sixteen Gigabit Ethernet ports support POE+, which can provide up to 25 W on each port up to 150 W total.

The COM module supports an optional full-featured Cisco® IOS® router software package with Mobile Ready Net to facilitate the most complex routing needs for security and compatibility with existing defense infrastructures. The Router is designed for battlefield applications and includes features to create and maintain both stationary and ad hoc networks with the highest quality-of-service (QoS). Moreover, it can adjust QoS based upon available bandwidth, resources, and available networks.

The Router module portion of the COM Subsystem is based on a Quad Core Intel® Atom™ processor with 4GB of RAM and four Gigabit Ethernet ports. The COM module also provides one additional SAM™ I/O site for more I/O such as Wi-Fi, or GPS for data packet time stamping.

The Mongoose is developed in alignment with the SOSA™ Technical Standard.