GMS Chief Technology Officer Chris Ciufo and National Sales Manager Jonathan Malaney accepted the award on behalf of the more than 120 employees who focus on providing Mission Systems and the Soldier’s Network with the highly integrated, high-density rugged server technology that come together to form this mission-critical tactical network. General Micro Systems, a long-time supplier to General Dynamics and a vendor-of-record for three types of commercial-off-the-shelf (COTS) computing systems in the WIN-T point-of-presence (PoP) and Soldier Network Extension (SNE), developed a 14-core server/switch/router networking box that would ultimately become the WIN-T Increment 2 solution. Just two of the new GMS boxes replace up to eight others in the previous system, giving the COTS computer industry’s latest processor technology to the warfighter in record time and meeting the program’s demanding size, weight, power and cost (SWaP-C) requirements. 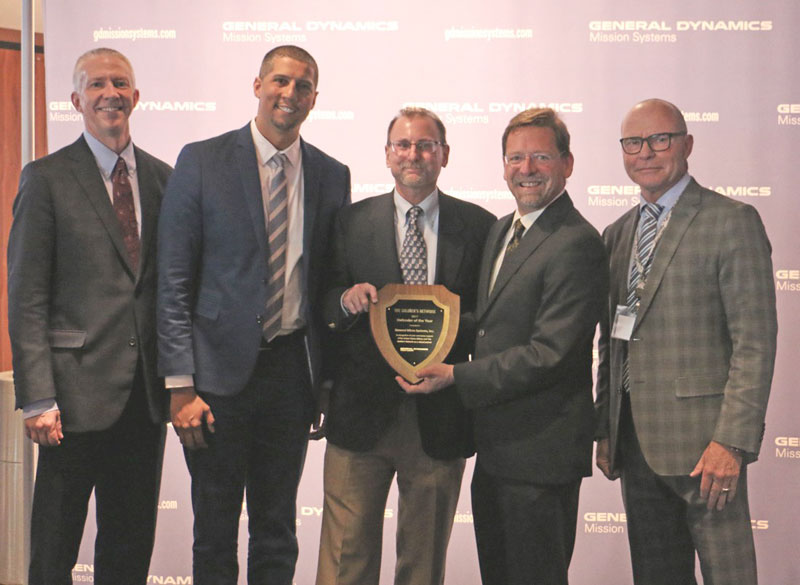 More than 60 WIN-T Increment 2 suppliers from 39 states attended the 2017 Soldier’s Network Supplier Event in Washington D.C. The annual event provides a forum for suppliers to collaborate and receive status updates on WIN-T Increment 2 and the value it delivers to soldiers. Suppliers also had an opportunity to visit their local congressional representatives about the program and General Micro Systems did its part on behalf of WIN-T.

“A robust supplier base that supports military programs like WIN-T Increment 2 is key to ensuring soldiers have a critical advantage over adversaries who threaten our nation’s safety and security,” said Bill Weiss, a vice president of General Dynamics Mission Systems.

“This success story was only possible because of the trust, leadership and teamwork honed by over a decade of previous close collaboration,” said Ben Sharfi, CEO and chief architect of GMS. “And while the team achieved success, ultimately it’s the warfighter who will benefit with a WIN-T Increment 2 communicate on-the-move battlefield network that meets today’s standards, not yesterday’s. We’re proud to be part of WIN-T Increment 2 and we appreciate the support of our local congressional members including California Representative Pete Aguilar, with whom we’ve met for two years running.”

WIN-T Increment 2 depends on support from a diverse group of suppliers. Located in more than 39 states, these suppliers include small, veteran-owned, woman-owned, disadvantaged and other businesses representing thousands of jobs. These suppliers and the employment they represent support local economies and help maintain job opportunities for highly skilled workers.

Reader Service Contact: Jonathan Malaney 772-266-4015 ext. 402, This email address is being protected from spambots. You need JavaScript enabled to view it.

About General Micro Systems:
General Micro Systems (GMS) is the industry expert in highest-density, modular, compute-intensive, and rugged small form-factor embedded computing systems, servers, and switches. These powerful systems are ideal for demanding C4ISR defense, aerospace, medical, industrial, and energy exploration applications. GMS is an IEC, AS9100, and MIL-SPEC supplier with infrastructure and operations for long-life, spec-controlled, and configuration-managed programs. Designed from the ground up to provide the highest performance and functionality in the harshest environments on the planet, the company’s highly customizable products include GMS Rugged DNA™ with patented RuggedCool™ cooling technology. GMS is also the leader in deployable high-end Intel® processors and a proud Intel partner since 1986. For more information, visit www.gms4sbc.com

Media Contacts:
Hughes Communications, Inc.
Cheryl Coupé
503-705-4189
This email address is being protected from spambots. You need JavaScript enabled to view it.

General Micro Systems
Chris Ciufo
360-921-7556
This email address is being protected from spambots. You need JavaScript enabled to view it.