GMS Announces Revolutionary Concept in Rugged Server Design: “Total Rack” in Only 2U

SAN DIEGO, CA AFCEA West 2017 – February 21, 2017 – General Micro Systems, Inc. (GMS) today announced that the S2U “King Cobra” 2U short rack server can replace up to 15U of equivalent server rack functions. This ‘total rack’ server system is made possible by King Cobra’s revolutionary modular and scalable architecture that is a breakthrough in electro-mechanical design. Everything about King Cobra represents a different way of thinking about rackmount server design: each sub-system is optimized for maximum performance, lowest power, highest efficiency thermal profile and modular replacement in the field. Additionally, each subsystem is scalable and upgradable to lower TCO over the installation life.

Starting with the field-removable OpenVPX single-board computer (SBC) motherboard—a mainstay in deployed defense systems—dual 18 core Intel® Xeon® E5-2600v4 CPUs mate with up to 1024GB (1TB) of DD4 DRAM and are supported with a completely PCI Express-based storage subsystem with up to 48TB of NVMe SSDs.

“This server is not what everyone else is doing. It’s a revolutionary concept in server design,” said GMS CEO and Chief Architect Ben Sharfi. “We looked at the entire rack, identified the functions most needed in a rugged system—from the server to the switch, and from backup power in our patent-pending APU to the existing system I/O—and designed a ‘total rack’ into a 2U, 17-inch deep box. It’s a future way of thinking about a server solution to the problem.” S2U King Cobra has been awarded or has pending a total of 12 patents. “If it wasn’t unique,” says Sharfi, “the patents wouldn’t have been issued. No server company is even close to this technology, nor will be in the near future.” 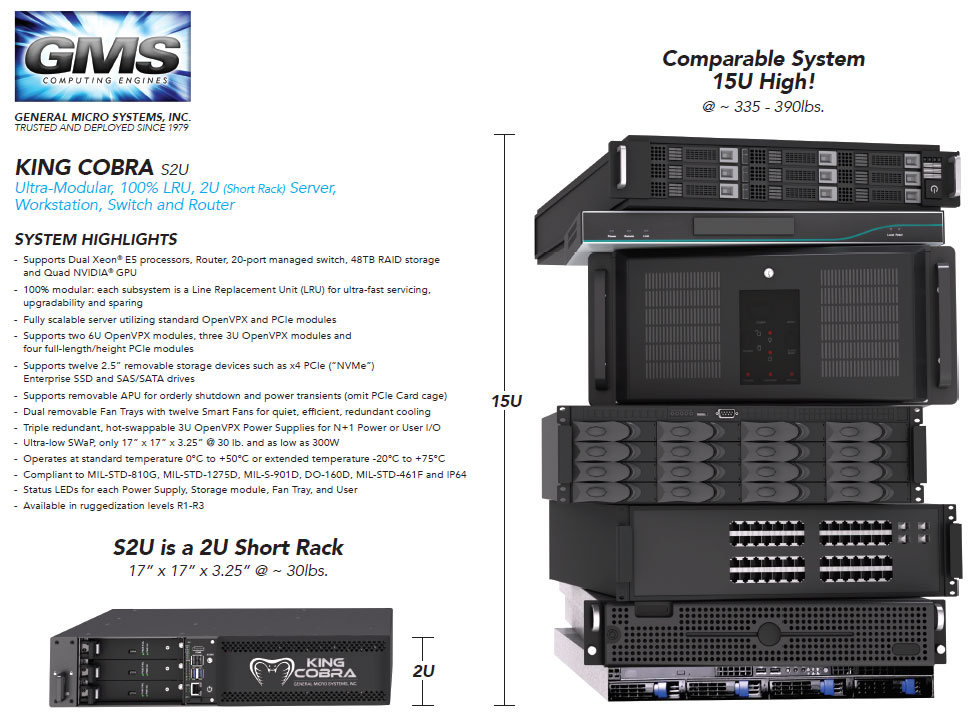 Patented and Designed to be Different, Efficiently
S2U is based upon 12 patents and pending patents, from the Intel® Xeon® CPU sockets and PCIe interconnects, to the distributed airflow that is managed via 12 individual smart fans with tachometers, to the 100 percent only-12VDC internal power buses that eliminate the inefficiencies of typical server power supplies with standard (and often unneeded) multi-voltage power rails and up/down converters.

The OpenVPX motherboard is designed by GMS and based upon a proven GMS compute-engine design that is well-fielded in defense applications. The Intel® Xeon® CPUs are cooled via a patented version of the company’s RuggedCool™ technology; the heatsinks are also custom designed for maximum thermal transfer to the finely managed in-box airflow. Dual hot-swappable fan trays each contain six smart fans which blow air in/out of the system to the side—not the front/rear as in typical servers. The side-facing fans operate based upon real-time cooling needs using input from in-system sensors. The advantage of this system is that it minimizes fan noise to the server environment by keeping the fans at the minimum speed to cool the system.

Buses, Data and RAID
Internal PCIe buses move data to the subsystems, including the 12-tray drive network-attached storage array. Here too, S2U is unique. While the system supports traditional SATA and SAS SSDs (up to 4TB per tray), S2U is best used with PCIe-based NVMe drives. These SSDs provide a direct PCIe path between CPU and storage, eliminating the typical server drive controllers that rob performance by converting from PCIe to another interface and protocol.

The advantage of this architecture is that a hardware RAID controller isn’t needed. Instead, Intel’s CPUs support RSTe and RST2 software RAID, the next-generation in ultimate performance RAID controllers. The Xeon® E5 v4 CPUs are designed to directly control NVMe drives and there’s no performance penalty; in fact, there is a gain by eliminating a separate hardware RAID controller. With 12 drive trays available, S2U supports up to 48TB of SSD storage with performance of well over 20X better than standard SAS/SATA drives. And the trays are dual-use, another unique feature of S2U.

Add-in Capability
Traditional servers have minimal ability to add-in specialty I/O or co-processors. While there may be one or two PCIe card slots for off-the-shelf modules, this is rarely sufficient for systems interfacing with multiple legacy I/O interfaces. S2U offers four different ways to add I/O and co-processors:

This array of add-in I/O options is completely unprecedented in the server industry, and more so in such a compact 2U short rack server. An example of what is possible with this flexible add-in modularity is with GPGPU co-processing. S2U supports up to 24 TFLOPS of arithmetic processing via just two Nvidia® Quadro P6000 processor GPGPU compute engine modules.

All totaled, S2U King Cobra can provide up to 25 add-in modules, including the five SAM I/O available on the motherboard and COM switch board. This kind of flexibility exemplifies what makes S2U so unique: thoughtful scalability and unprecedented engineering prowess.

Power, Switch and Router
S2U includes two ways to the power the system: via the three N+1 3U OpenVPX power supplies or via the add-in PSU/APU. The PSU/APU replaces the PCIe card cage and provides battery power to allow orderly suspend-to-disk or shutdown. Regardless of which option the user selects, the power supply is optimized for maximum efficiency. All S2U internal power buses are +12VDC, eliminating the need for multiple in-system power converters. This dramatically differs from traditional servers that use commodity “black box” power supplies with multiple (often unneeded) voltage outputs. S2U’s power distribution system gets the energy where it is needed without superfluous power rails.

Finally, S2U is designed to be more than a high-performance server with NAS and scalable I/O. There’s also a 22-port intelligent managed Layer 2/3 Ethernet switch with POE+ on all ports, plus an additional four 10GigE ports (SBC plus switch). Available Cisco® routers include an Embedded Services Router (ESR), optimized for moderate performance, or Cisco’s 1000V™ Series Cloud Services Router (CSR) that creates a locally hosted, infrastructure-agnostic “single tenant router” capability. Routing is available on all the switch’s 1 Gigabit and 10 Gigabit ports.

The Future Is S2U King Cobra
Everything about S2U is a new way to create server design: it is efficient, scalable, field-replaceable, and at only 2U high and 17-inches deep, S2U can replace up to 15U worth of equivalent server boxes. This “total rack” design is intentional and is truly the future of rack-mount server design.

General Micro Systems Is Trusted and Deployed: On the Sea, in the Air and on Land

Reader Service Contact: Jonathan Malaney 772-266-4015 ext. 402, This email address is being protected from spambots. You need JavaScript enabled to view it.

About General Micro Systems:
General Micro Systems (GMS) is the industry expert in highest-density, modular, compute-intensive, and rugged small form-factor embedded computing systems, servers, and switches. These powerful systems are ideal for demanding C4ISR defense, aerospace, medical, industrial, and energy exploration applications. GMS is an IEC, AS9100, and MIL-SPEC supplier with infrastructure and operations for long-life, spec-controlled, and configuration-managed programs. Designed from the ground up to provide the highest performance and functionality in the harshest environments on the planet, the company’s highly customizable products include GMS Rugged DNA™ with patented RuggedCool™ cooling technology. GMS is also the leader in deployable high-end Intel® processors and a proud Intel partner since 1986. For more information, visit www.gms4sbc.com

Media Contacts:
Hughes Communications, Inc.
Cheryl Coupé
503-705-4189
This email address is being protected from spambots. You need JavaScript enabled to view it.

General Micro Systems
Chris Ciufo
360-921-7556
This email address is being protected from spambots. You need JavaScript enabled to view it.